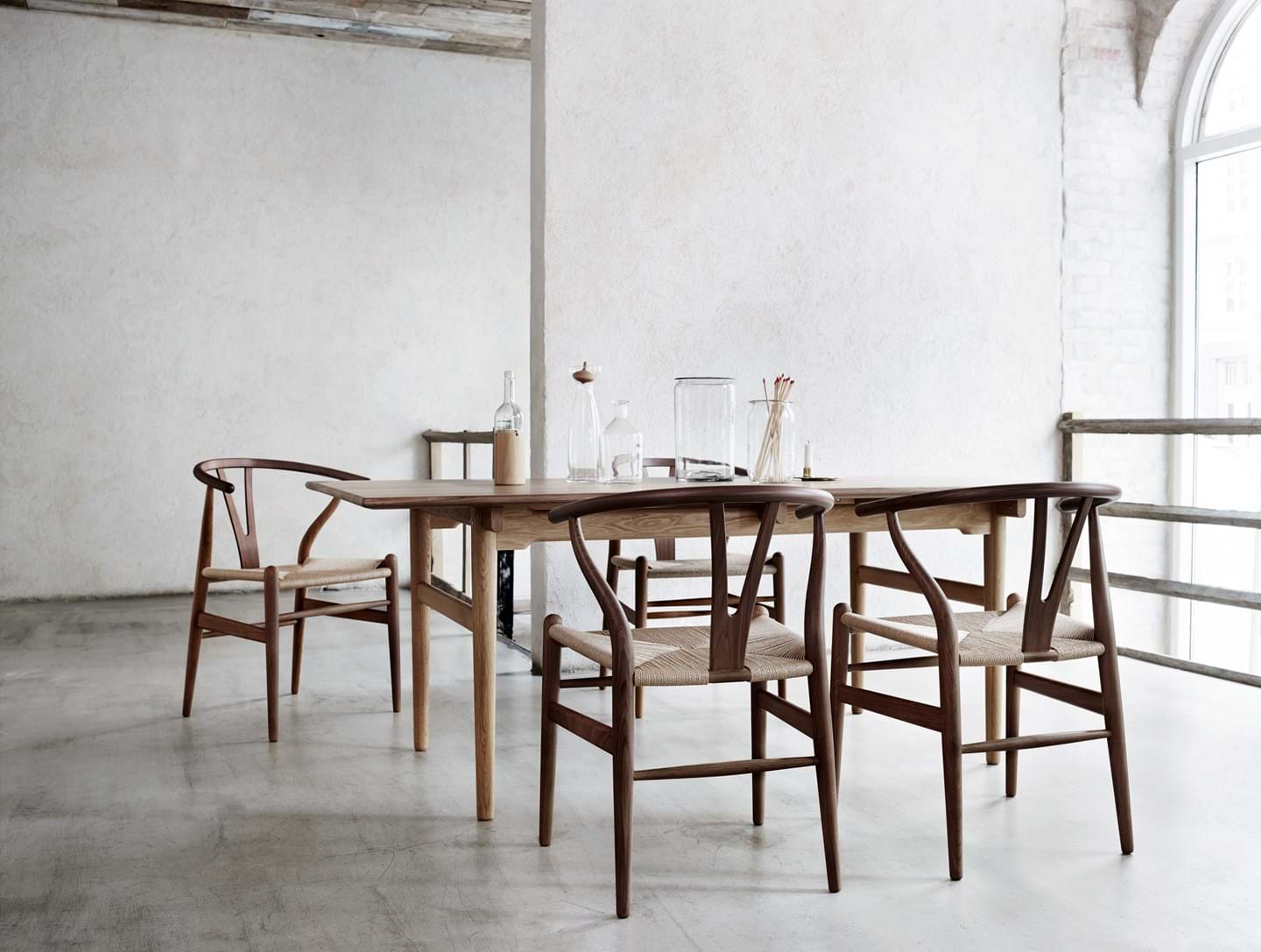 When a design, like the CH24 Wishbone Chair, proves it can endure and stand the test of time it becomes a classic.

To do this the design has to stay as relevant throughout its time as it did when it was first conceived. True furniture design classics have timeless appeal. They cross eras and defy trends while sitting well in almost all styles of interior.

One design classic that stands out is Hans J Wegner’s CH24 Wishbone chair for Carl Hansen & Søn. It has never gone out of fashion and as a result, it’s been in continual production for 70 years.

Its form is recognisable in an instant. Once discovered, who can forget CH24’s Y-shaped back and sculptural curves?

But great design does not have to stand still. Indeed, for 2020, the furniture makers have given the CH24 Wishbone chair a facelift. To mark the designer’s 106th birthday, Carl Hansen & Søn commissioned Ilse Crawford. This London-based designer operates Studioilse, a multidisciplinary practice. 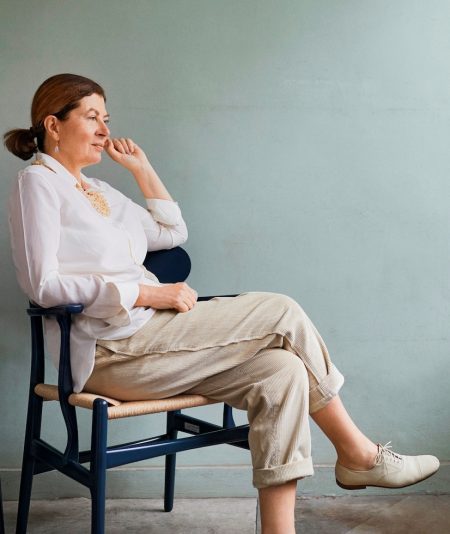 Crawford and her team have reimagined the design in a luxurious, rich and glossy navy blue. It is only available as a limited edition release. But if you are lucky enough to secure an example you will own a bold counterpoint to the classic wooden finish. Its moody hue contrasts dramatically with the hand-crafted and very tactile woven seat.

Anyone who has ever dreamt of owning a CH24 Wishbone chair will feel fortuitous. You will have the real deal in your home. Its silhouette alone brings the piece to life. It inspires appreciation and enjoyment every day.

Crawford has a thoughtful almost humanist approach to design. She aims to put the user at the centre of all that she does. Wegner would no doubt have approved. He had an unwavering curiosity about wood’s potential. The Dane loved to push the boundaries of the natural, organic material with which he worked. The result was always simple furniture. For Wegner and Crawford form always follows function.

Holger Hansen met Hans Wegner at the 1947 Copenhagen Cabinetmakers’ Guild exhibition. Holger was the son of Carl Hansen. Wegner was then a young designer intent on creating radical new pieces of furniture. Carl and Holger Hansen ran a cabinet making company. They were hoping to shift into serial manufacturing.

They took a chance on the young Dane Wegner. As a result, they put five of his revolutionary pieces into production by 1950. In so doing the three men ushered in a new era of Danish design. The firm still makes them all today.

The Wishbone chair was one of these five chairs that Wegner designed for Carl Hansen & Søn. Its handcrafted design captures what is the essence of contemporary Scandinavian design. It also fulfils the functional demands of comfort in a chair that also supports the back.

Conceived in 1949, the Wishbone Chair went into production the next year. Wegner was a cabinetmaker by trade. He took inspiration from by some portraits of Danish merchants. The artist painted them sitting in wide, rounded Chinese Ming Dynasty chairs.

It was these chairs that caught Wegner’s imagination. 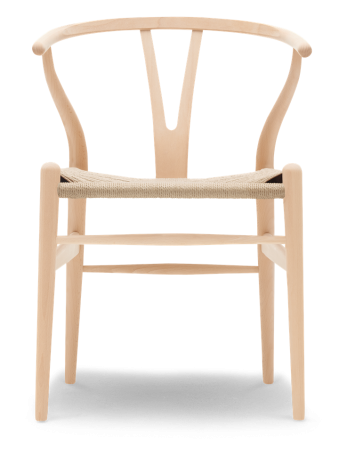 To create the Wishbone chair, Wegner combined the back- and the armrest. They became one, steam-bent curve. He then supported it with the wishbone, Y-shaped back that gives the chair its name.

The Wishbone chair has 14 separate parts. They take three weeks to prepare and assemble. The process involves 100 steps. These range from steam-shaping the backrest to hand-weaving the seat.

Approximately 120m of paper cord goes into the weave. All the work is by hand. The craftspeople can take one hour to make one seat.

For its simple hardwood silhouette, Wegner eliminated any material that was not essential. The seat he decided to make from paper. This he spun to look like rope. It was a Swedish innovation from World War 2 when there was a sisal scarcity.

The design followed Wegner’s “process of purification and…simplification”. Wegner was meticulous about his design. Indeed, he moved in with the Hansen family on the island of Funen. This so he could check every step of the making process.

Wegner said, “A chair isn’t finished until someone sits in it.” To keep the chair fresh and attractive Carl Hansen & Søn has continued to innovate.

Hence the latest venture with the firm working in close collaboration with Crawford. What inspired her was Wegner’s Asian design history love affair. It was after all this fascination that first informed the design classic’s shape. The limited-edition chair became available on what would have been Wegner’s birthday – 2 April.

Crawford explains the blue is a colour that played a big part in Chinese culture. Indeed, Asian craft and blue and white china go back many centuries. Also, dark blue is in many Chinese indigo textiles. Crawford’s added a high gloss finish. It is in homage to the traditional Chinese lacquer finish.

Each chair comes with a small brass plate. Fitted to the frame, it carries Wegner’s signature and his date of birth. 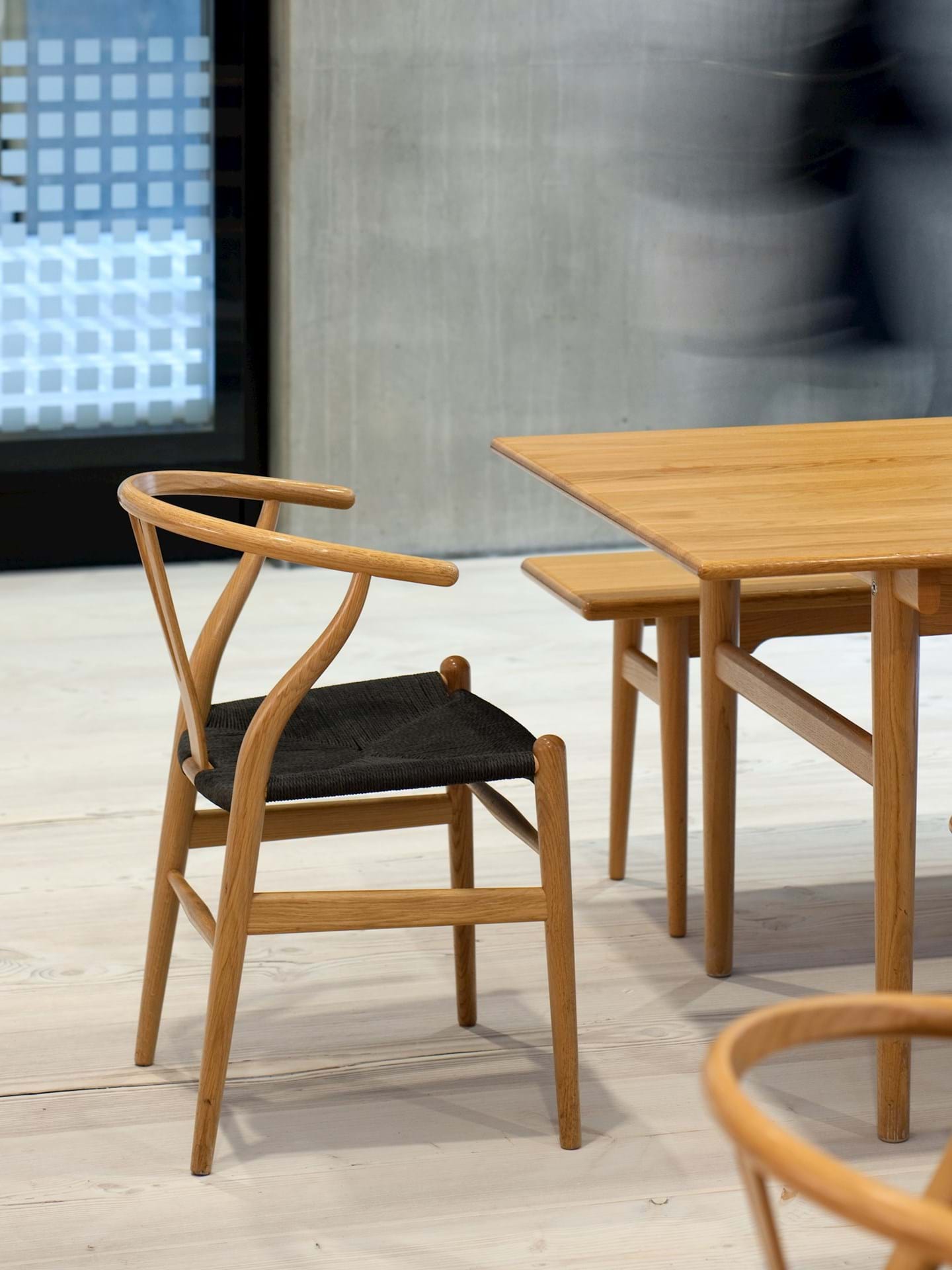 As a design classic, the CH24 retains its value. Limited editions are even expected to gain value over time. Examples continue to become rarer and much sought after.

Because the CH24 is a timeless design classic many owners know it will appeal in decades to come. As a result, many pass theirs onto the next generation to enjoy and keep.

This reinforces the element of trust when buying a design classic. Owners know that what they’re buying and passing on is authentic and well crafted. The piece has also already stood the test of time.

Design classics are often considered sustainable choices. Pieces like the CH24 are still made in the country of origin. 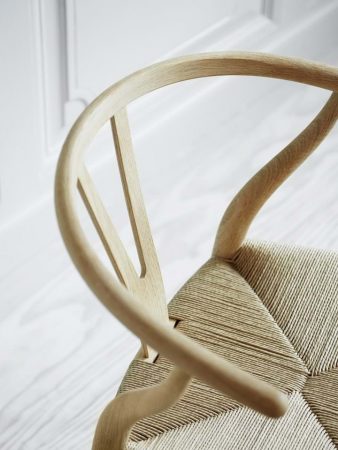 The CH24 is most definitely a design that will last. And as with so many of the true classics, it’s a design that has generated myriad copies over time. It’s why you have to beware of copies and fakes.

Today the Wishbone Chair frame is available in several different finishes. There is bound to be one that suits any individual’s taste. You can find colour-lacquered versions. There are no less than 25 colour-lacquered finishes. Also, there are others with natural woods like ash, beech, cherry wood, oak, smoked oak, and walnut.

Carl Hansen & Søn launched the ten years ago in 2010 when the iconic design turned 60. Since then they have added more hues to further appeal to new generations of Wishbone owners.

Think about a piece like a Wishbone when you are renovating your home. You may find your attention wandering. Structural engineers. Schedules of work. What you are going to use for those beautiful finishing touches.

The Wishbone Chair is perfect. It’s one of the standout products. Built to last but you can live with it every day without tiring of it. Its pure and simple design says stability and comfort. As Ilse Crawford enthuses. The Wishbone chair is so good, so refined, so well resolved” that people will never tire of it”. 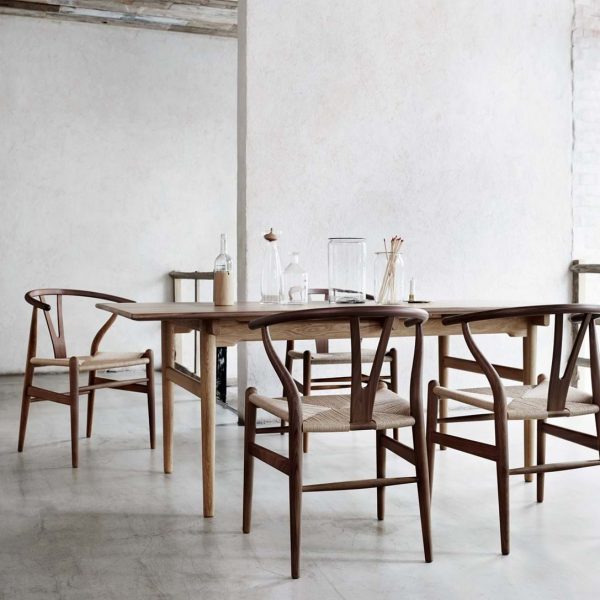