Hans Wegner and Carl Hansen & Søn – A Match Made in Heaven 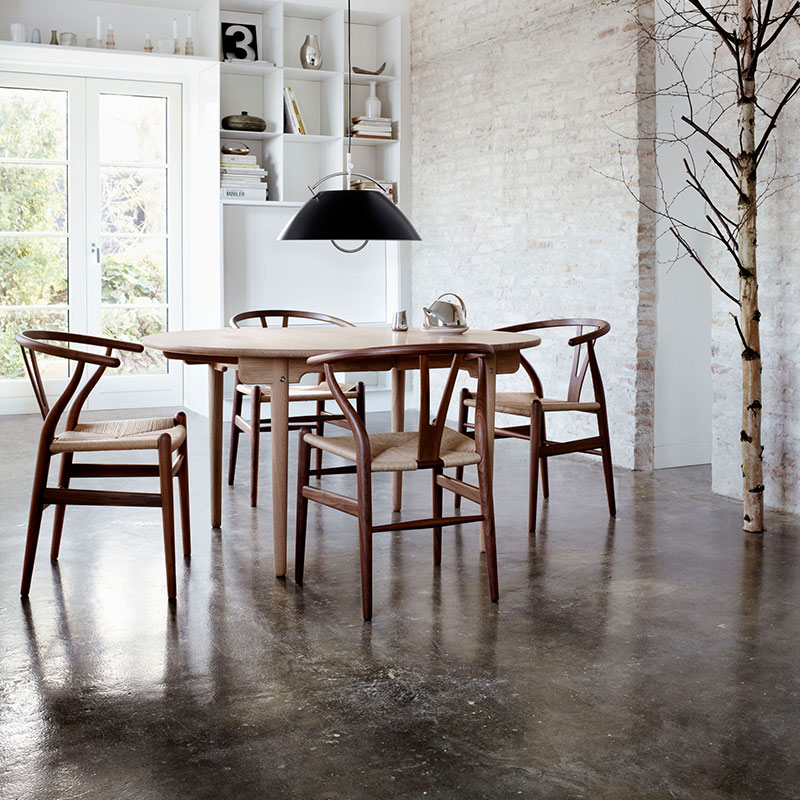 The full name of Hans Wegner is Hans Jørgensen Wegner. He was a world-famous Danish furniture designer, born in 1914. By the time he died 93 years later, Hans Wegner had created a body of work that is to this day feted for its high quality and thoughtfulness.

Wegner contributed a significant amount to the popularity and iconic status of mid to late 20th-century Danish design. His work is often described as Organic Functionality. In his career, he designed over 500 different chairs.

Hans Wegner was born in southern Denmark on 2 April 1914. The son of a cobbler he became a child apprentice to H. F. Stahlberg, a master cabinet maker. He soon discovered an affinity with wood. This he carried through the army and college to the Danish School of Arts and Crafts and the Copenhagen’s Architectural Academy.

At the academy, Hans Wegner acquainted himself with the Carpenters’ Guild Furniture Exhibits, which began in 1927. He came to know the work of master cabinetmakers. These included Johannes Hansen, Moos and Rudolf Rasmussen, Niels Vodder, L. Pontoppidan, Jacob Kjaer, and A. J. Iversen.

Hans Wegner also devoured the work of architects. These included Kaare Klint, Mogens Voltelen, Vilhelm Lauritzen, and Ole Wanscher. Wegner learned how workmanship and design in combination could have a powerful effect.

After a while, Wegner took charge of the furniture in the Aarhus City Hall. He went on to launched his design studio. Wegner developed furniture for a chain of Danish grocery stores. He remained active in his practice until the last decade of his life.

It was a highly-productive career. Hans Wegner created what some people consider to be the world’s best chairs. He applied a deep understanding of wood. Wegner’s skill was recognising how the wood was a product of nature. The designer saw it had many virtuous idiosyncrasies.

Wegner’s fruitful association with Carl Hansen & Søn began in 1949. That was when he met the firm’s boss Holger Hansen. It was to be a lasting collaboration between the two parties.

Master cabinetmaker Carl Hansen founded the company in Odense in 1908. The first factory opened seven years later. It specialised in bedroom furniture for the middle classes and gentry on the island of Funen.

When the global economic crisis of the 1930s happened, it hit Carl Hansen hard. It was then that his second-oldest son, Holger, took over the business in 1934. And it was 15 years later that Holger suggested to Wegner that he create a collection of chairs.

Produced at the factory and sold by Carl Hansen & Søn, it was a bold initiative. And it represented a new form of furniture marketing. Wegner was among the new generation of young Danish furniture designers. They joined forces with the business after the Second World War.

It was also now the company started collaborating with salesman Ejvind Kold Christensen. Christensen’s reputation was for having an eye for new trends. Instead of promoting furniture to retailers, Carl Hansen & Søn started exhibiting. It also began advertising its products direct to consumers.

The collection that Wegner designed and made for the firm is clear proof of his unique understanding of the materials with which he worked.

In 1952 Wegner said: “Imagine if you could design one good chair in your lifetime – but that cannot be done.” It summed up Wegner’s conviction. The task of designing the perfect chair is never complete. 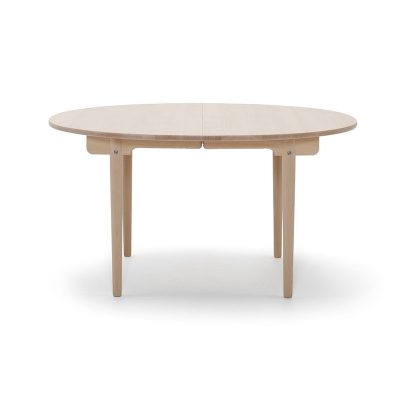 Over the next 50 years, Wegner created a wealth of striking furniture pieces. As well as his famed chairs these included many innovative tables. An example is the Carl Hansen CH337 solid wood Round Extendable Dining Table of 1962. The CH337 is perfect for smaller spaces. Extending it is easy. This means it suits a range of dining needs. It seats between six to 12 diners.

From the same period comes the beautifully-crafted Carl Hansen CH338 Oval Extendable Dining Table. This curvaceous example is one part of a series featuring stylish extension options. Seating between six and 16, this piece offers great flexibility when it comes to dining.

Wegner’s place in design history rests, above all else, on his chairs. Each of them is not only very original but is also natural in appearance.

Wegner had an unparalleled sense of wood’s potential. He became a pioneer of Danish Modernism through creativity and extraordinary sculptural expression.

Wegner interpreted organic modernism. His interest was in the interaction between a product and its user. For this craftsman, the design experience was not limited to how things looked. For him, a chair had to speak to all senses. Wegner was also uncompromising in his passion for creating comfort.

Wegner saw his brand of Danish style as a continuous process of purification and simplification. He did not add flourishes but based his design on four legs, a seat, and a combination of backrest and armrest. 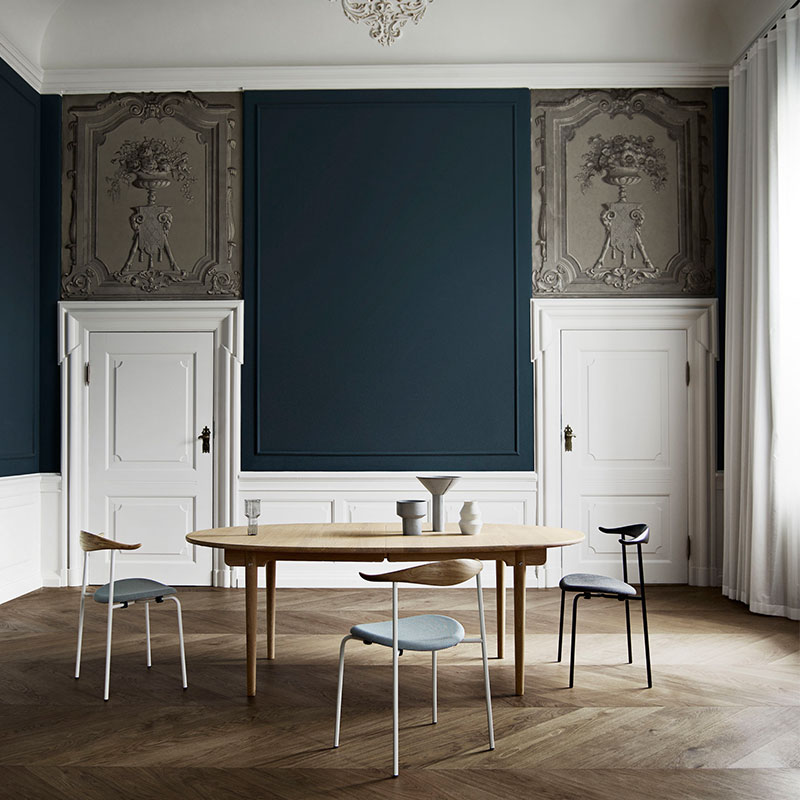 The strategy Carl Hansen established when he founded his company 110 years ago in a small rural workshop continues to guide the firm today. It was to always work with the best contemporary designers. And to produce quality furniture based on traditional craftsmanship.

When Wegner linked up with the business in 1949, connoisseurs in the industry knew him. But he was not yet recognized by ordinary consumers. He trusted Holger Hansen and the production skills of Hansen’s employees. It was this trust that led to Wegner agreeing to the task Holger had set. Wegner completed his initial drawings Then he moved in with the Hansen family. It was now he began producing prototypes.

Knud Erik Hansen is Carl’s grandson and Holger Hansen’s son. He says that Wegner and his father’s bond was a mutual need. A love of wood and a desire to produce quality wooden furniture drove the business’s commercial side.

The two men were both excellent cabinetmakers. But Holger was also a canny businessman. As a result, the two men complemented each other as well as being very strong friends.

Wegner’s talent was unique. It manifested itself during his collaboration with Carl Hansen & Søn. The year 1950 saw the launch of his CH22, CH23, CH24, and CH25 chairs. Design enthusiasts received them with great interest.

To this day, many of these chairs still enjoy an iconic status. The most famous one is the 1950 Wishbone Chair, CH24. This is often selected for the status of being ‘the world’s best wooden chair’. It is the best-seller of all Wegner’s chairs. 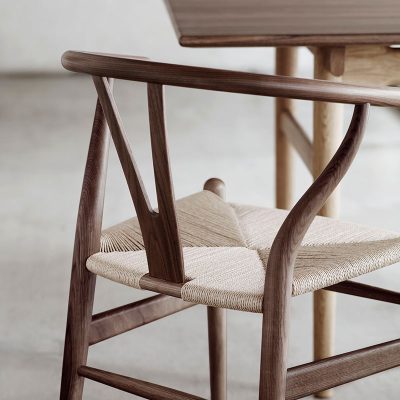 It was the first model Wegner designed for Carl Hansen & Søn when they joined up in 1949. It has been in continuous production ever since its launch a year later in 1950.

This also applies to the CH25 lounge chair. It was also among the first four chairs Wegner created for Carl Hansen & Søn. It was revolutionary when it went into production in 1950.

There have been recent reissues of the CH22 lounge chair in 2016 and the CH23 dining chair in 2017. Both of these reflect Wegner’s immense talent for craftsmanship and comfort. These relaunches have reunited Wegner’s first collection for Carl Hansen & Søn.

In 1963, Wegner was to develop a shell chair. He built on some preliminary studies he had done way back in 1948. They were for a competition held by the Museum of Modern Art in New York. For the design, Wegner used form-pressed veneer for the cabinetmaker Johannes Hansen

The design was ahead of its time. But, it has had to be patient for several decades before entering the spotlight. Today, it is one of Wegner’s most iconic and groundbreaking chair designs.

Wegner, who loved wood, chose the latter. Among the products of his short dalliance with form-pressed veneer was the Shell Chair with its three legs. It is now world-famous. This was also relaunched by Carl Hansen & Søn. Its model number is CH07 and it re-emerged on the furniture scene in 1998. Within a few years, it joined the growing number of best-sellers for the company.

Knud Erik Hansen represents the third generation of this iconic family business. With his energy and enthusiasm, he took over the helm in 2002.

He has applied his vision for efficient production and quality craftsmanship. He has also developed a modern sales and distribution network. Together these have given Carl Hansen & Søn a global brand status.

This has not only introduced Carl Hansen & Søn to a wider audience. A global public has now discovered the iconic works by the mid-century Danish design masters.

Carl Hansen & Søn’s collaboration with the Hans J. Wegner Design Studio continues. When Wegner died, several of his furniture designs had never gone into production. Some others had only seen the light of day in small numbers. The Wegner family gave Carl Hansen & Søn their permission to produce some of these.

Carl Hansen & Søn decided to put Wegner’s CH20 Elbow Chair into production in 2005 for the first time. Since then it has established its position as a modern classic. Indeed, in New York, it won the ICFF Editors’ Award. 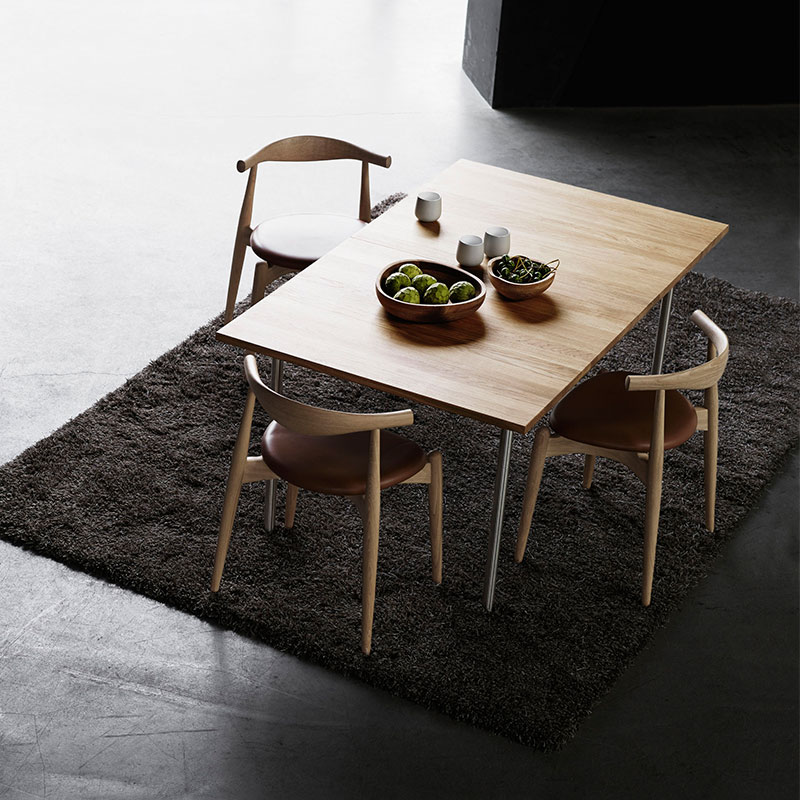 The Elbow Chair’s backrest is steam-bent. Made from a single piece of solid wood, it offers elbow and lower back support. It also enables the user to adopt a variety of sitting positions. The chair has a unique rail construction under the seat. This is in form-pressed veneer. It adds optimal stability combined with a light and floating expression.

Knud Erik Hansen says that he grew up with Wegner’s furniture. He came to see that Wegner’s understanding of how to shape wood was unsurpassed. All the furniture Wegner created emanates something that is solid, simple and organic.

The more we understand what lies behind this furniture, the more respect we have for it. At Carl Hansen & Søn every item of furniture moves through many expert hands. There is also a complete focus on making each piece perfect throughout. Nothing has changed since 1908 when it all began. 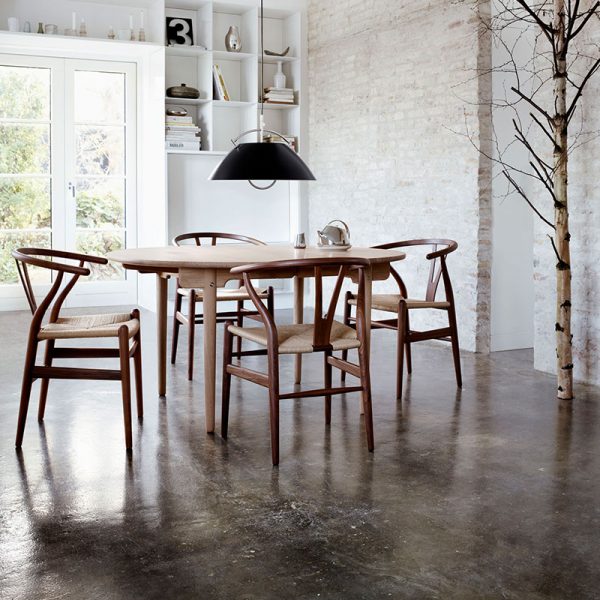